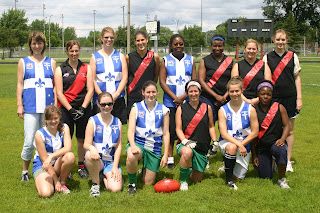 July 12: What started as an idea months ago became reality last Sunday as Montreal hosted it's first ever women's Aussie Rules match. It was held as a curtain raiser to the ECAFL Round 5 men's match-up between the Bombers and the Saints.

With a portion of the girls now regulars at training, an injection of Gaelic women talent and some absolute newbies to the game the Montreal Angels split themselves into two: Angels v Devils and the game got underway. 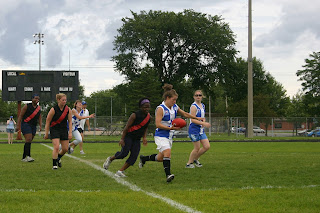 Devils ruck Lindsay started well against Angel Celine and the red and black running army immediately kicked into gear as if they were seasoned professionals. The 'Triple M' brigade of Mel, Margo and Mimi controlled the ball at ground level and sent the Devils forward early. Up forward Devil Full-Forward Dani was proving a handful right from the outset and before to long had slotted through her first major and given the Devils the lead.

The quarter far from over the Devils continued to dominate and the signs were looking grim for the shell-shocked Angels. The Devils finding another avenue to goal through classy small-forward Andrea. After a quarter of complete domination the teams went to their huddles the Devils bolting to a 19 point to zero quarter.

With Fred Frost at the helm of the Angels he went about working out a gameplan to help his flat footed team. The Angels started the second with renewed enthusiasm, Aimee and Uche starting to work themselves into the game the Bleu and Blanc for the first time was looking dangerous as the entered their attacking half. Finally getting on the scoreboard the Angels traded goals with the Devils, Trish showing her adaptation to Aussie Rules would be smooth as she helped the Angels outscore the Devils albeit it only by 2 points. The Devils still holding a healthy 17 point lead at half-time.

Devils coach's Ben 'Maximus' Vawser and Carl kept their squad focussed on the positives as they planned their second half assault. If Devils forwards Andrea and Dani had been a handful in the first half Angel Aimee had decided that the second half would belong to her. Aimee fed off the good work in ruck by Celine as she gathered possesions at will. Helped along by some good support in Olivia and 'Superkid' Bronte the Angels had turned their game around. With Rondi now holding the fort down back the Angels were free to push forward and create havoc in front of goal. The Angels had 4 shots at goal to 1 in the third quarter, unfortunately for them some inaccurate kicking had let them down but they still had managed to squeeze the gap back to 9 points and also had all the momentum going into the last.

With both coach's giving their troops the final instructions the teams resumed play in what was poised to be a cliff hanger finish. Both teams throwing everything they had into one last final effort, it was the Angels duo of Uche and Aimee that seemed to wrestle the game back into their favour. Both teams traded goals again, every possession hard earned as Devils Isabelle and Mel pushed to give their team the edge. The game delicately balanced a fabulous goal to the Angels drew them to within 5 points with only 1 minute 22 seconds left on the clock. The titanic contest between Celine and Lindsay continued, and as the seconds ticked under a minute it looked as if they Devils may have done enough to stay in front. The ball in dispute around the centre it was the Angels who broke free getting a clearing kick forward that spilled 35 metres out in front of goal - a foot race to the loose ball underway with less than 10 seconds on the clock. Arriving first the Angels scooped up the ball and then from 20 metres out and only 3 seconds on the clock kicked for goal and victory in the game.

Poster. - The low-kicked ball looking a certainty for goal grazed the goal post as it sailed through registering only 1 point and not 6. The siren blowing 1 second later and giving the heart stopping first win to the Devils.

A fantastic effort by all girls the game was played at such a high level it is almost inconceivable that it was, for every player - their first game of Aussie Rules.
Posted by Neotraveler5 at 10:04 PM