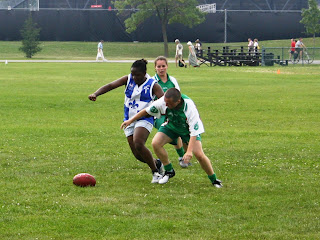 August 9: The general consensus afterward was that the Women's game last week at Parc Jarry was clearly a better spectacle than the Men's. Hopefully this is a sign of a healthy future for Women's footy in Quebec.

As the game got underway it was clear that the Angels limited experience playing together was going to be truly tested by a well-bonded Shamrocks outfit. Despite strong work through the midfield from the ever dependable Aimee and Margo the Angels found the going tough against the team-work of the Shamrocks. Frustrated by rule interpretations and plenty of niggling work from the Shamrocks under the packs that serial pests Greg Williams and Tony Liberatore would have been proud of, the Angels tried desperately to get their game together. Mimi battled galantly deep in the backline, but was constantly under attack from the relentless crumbing of the Shamrocks small forwards, in a display of outstanding opportunism not seen since Phil Matera's stella performance throughout 2003.

By the end of the first half the Angels seemed to be losing their grip on the contest. But all of their hard work at training was about to pay off as they took to the field with a fresh attitude, ready to get right back into it. Coach "Ferrari" Ferreri made the match-winning decision to move Lindsay into the ruck to start the second half (apparently Assistant Coach Vawser had pointed this out to him many times earlier but he stubbornly resisted out of pride and pig-headedness). Now matched in the ruck with Lindsay's dominance, Aimee constantly moving the ball forward and Margo able to run off half-back the Angels forwards Uche and Dani were receiving the opportunities they had been craving and it was only a matter of time until the scoreboard started to reflect the play. While the Shamrocks forwards had dominated on the ground earlier, Uche and Dani now controlled the air and the heat was well and truly on in every way.

Clearly not interested in an honourable loss or respectable result, the Angels put everything they had on the table. With run now coming from the entire team the Angel machine was now in top gear and if there's a team out there who can stop them in full flight, I haven't met them.

A fourth and final goal from Uche sealed the incredible victory for the mighty Angels to claim the crown as the number 1 team in Montreal. Truly an all-round team performance and inspiring display in conditions where lesser competitors would have folded after the first few minutes.