Saturday brought glorious sunshine and a slight breeze in Ottawa as the Angels, clad in the iconic orange of the NGD Giants, went head to head with the reigning OAFL women’s premiers. The Swans adapted to the tricky breeze best in the first term moving the ball well and scoring two goals through the class and poise of stars Holly Constanza and Kelly Kennedy. The Angels responded with a major of their own from engine room dynamo Val Moreau and at the first change the Swans clung to an 8 point lead. With the breeze at their backs in the second term the Angels lifted, coach Dan Robinson’s pleas for greater attack on the ball were met and Montreal began to control the play. Margo Legault was a standout at stoppages as she dominated the middle of the ground and gave the visiting Angels all the momentum. The Swans fantastic defensive pressure and the Angels wayward kicking in front of goal would see them only net 4 behinds, the Swans managing 2 behinds of their own and the margin reduced to a single goal at the main break.

The third term turned into an arm wrestle that mirrored the evenly matched squads’ talent and determination. The Angels got brilliant service from star of the future Gab Benedetti and veteran Mimi Eboka, Francesca Benedetti taking her game to the next level as one of the Angels best. The Swans weren’t to be outdone, Kelly Cambridge a rock down back while Sarah Ennor’s silky smooth talents allowed her to sneak through the quarter’s only goal and give the Swans a handy 12 point break heading in to the final term. After an epic three quarters of football the Swans would prove why they beat all comers in the OAFL in 2014. Using their experience on the full size field Ottawa overrun the tiring Montreal outfit, Vivian Nguyen and Holly Constanza orchestrating a late surge that saw the Swans kick three goals to none and win a tough first up battle by 31 points.

ANGELS SIT ATOP NORTH-EASTERN SHIELD TABLE AFTER ROUND 1 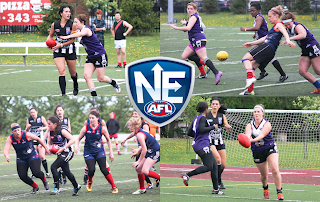 AFL Quebec’s recent Preseason Cup tournament also served as the debut round of the North-East Shield, an exciting new women’s Australian Rules football competition contested between New York, Boston and Montreal. The league has introduced an innovative new scoring system in which 2 premiership points are awarded for a win and 1 point for a draw. In addition, any away team that secures a victory or draw on the road is awarded 1 bonus point.

The hometown Angels and New York Lady Pies squared off in game one, the visitors having the advantage of stiff breeze at their backs in the first half. The contest was a tight arm wrestle early, both teams’ defences holding up well under the pressure. Margo Legault was in everything for the Angels but it was the work of the Magpie army’s Licata, Hinojosa and Casillas that swung momentum New York’s way. It would be Andrea Casillas who eventually broke the drought, the talented utility slotting through a classy goal on the run to give the Magpies the early lead. The Angels threatened to snatch back the lead late in the half, rookie Angel Robyn Graham leading the charge showing glimpses of brilliance on debut, but Magpie defenders Ervin and Ridwan held the fort down back and New York held on to a hard earned 4 point halftime lead.

The Angels fought back strong in the second half, Elaine Gilmore unstoppable through the middle adding a goal and putting the Angels noses in front. Veronique Chasse had been a handful for the opposition all game and Margo Legault was providing the Angels drive through the midfield dominating the clearances, the purple haze slowly gaining ascendency in the match. Despite having all the play the Angels were wasting opportunities in front of goal. The Magpies were far from out of the match and rebounded the ball forward against the flow of play scoring a behind. With only a goal in it the final nail on the coffin was delivered by Angel Emily Legault, the star ruckman slamming home her first goal of the afternoon allowing the Angels to run out  12 point victors, Angels 2.5 (17) to Lady Magpies 1.1 (7).

Game 2 pitted arch-rivals Boston and New York against each other. The Demons launched out of the gate, a goal to the midfield machine Alysha Olson and two to Holly Teufel giving the Boston squad complete control of the match early. The Magpies fought back with some forward forays of their own, Samantha Wolf playing a lone hand up front trying to ignite a spark and managing two behinds for her efforts. The Magpies were working their way back into the game with some solid work from Karen Muiter and Alessandra Nolting, but the early damage was proving difficult to undo and the Demons held a commanding 17 point break at the half.

With their backs to the wall the Magpies came out fighting. Melissa Fudor continued her sublime work through the middle and Aiko Neligan threw herself fearlessly into every contest but it simply wasn’t enough. Boston had their tails up and Holly Teufel was putting on a clinic in front of goal booting her third for the match. With further great plays from Andrea Williams and Anna Belfore the Demons stormed home to a 35 point mauling of the Magpies. Demons 5.7 (37) to Magpies 0.2 (2).

Boston’s fierce victory over New York had pundits billing them as warm favourites over the Angels for game three, but with some of the team’s marquee players already looking on from the sidelines things were about to get worse. The Demons six goal victory had come at a price, and now two more of their stars were sitting on the sidelines nursing injuries. In no mood for mercy the Angels were about to move up a gear. Tara Cools-Lartigue had been one of the Angels best all day, her attack on the ball and ability to win the contested ball a key to Montreal’s repeated forward plays. Lindsay Belzie who had started off slowly was also finding touch. Dominating up forward the spearhead finally slotted her first for the day and the Angels were off and running. Lisa Arredondo refused to throw in the towel for the Demons and led the charge for a mini Boston revival. It netted a point to Olson before the Angels snatched momentum back, Emily Legault starting to make her mark on the game peppering the goal face with three behinds. As the siren sounded for halftime an inaccurate Montreal held an 8 point lead and the Demons were hanging on by a thread.

Having formed an absolute brick wall in defense all day alongside impressive rookie Melissa Saltarelli, Mimi Eboka’s push forward earned her a first ever goal and a valuable one at that, as Montreal sat on the verge of breaking open the match. When Lindsay Belzie added her second major of the game and Emily Legault finally broke through for her first after kicking five behinds the Angels had sealed the match cruising to a solid 29 point victory. Angels 4.6 (30) to Demons 0.1 (1).

The results of the round placed Montreal at the head of the table, but only by the smallest of margins. The race for the North-East Shield very much still up for grabs as the three teams get set to battle out round two in Boston on June 15.
Posted by Neotraveler55 at 9:34 AM