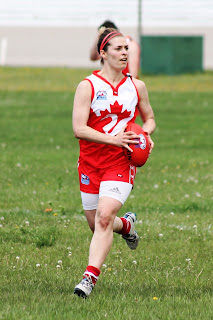 WOMEN'S OAFL - ROUND 4: The Montréal Angels partnership with the newly formed Ottawa Swan's women's club continued its excellent form this past weekend, the combine team moving to 3-1 for the season and nestling in to second place on the Women’s OAFL league table.

Montréal would contribute half the playing squad as five Angels (Tara Cools-Lartigue, Kelsey Martin, Margo Legault, Mirabel Eboka and Aimee Legault) made the journey to Toronto to tackle the Hamilton Lady Wildcats.

The Wildcats had also been turning heads in a brilliant start to their debut season, a 95 point demolition of the Toronto Dingoes and 2-1 start to the season proof enough that the yellow-and-black army has what it takes to win games of football.

With Tristan Waldock looking on (Coach of the Canadian Women’s National team), the Angels had even more reason to showcase their talents. After a six-hour road trip the Angel-Swans were in no mood for mercy as the game got underway, an all-out assault stunning the Wildcats from the very first bounce. By the end of the first quarter the Angel-Swans had slammed home four goals from nine scoring shots, the shell-shocked Hamilton squad failing to trouble the scoreboard. Angel-Swans 4.5 (29) to Wildcats 0.0 (0).

The tone would continue on in the second term, Mirabel ‘Mimi’ Eboka outstanding across the back half as she repeatedly cleared the ball and set her teammates up perfectly for goals. The Wildcats would finally register a major on the board but slip further behind, trailing at the half by 37 points. Angel-Swans 6.7 (43) to Wildcats 1.0 (6).

The Angel-Swans kept the pressure on in the third, Margo Legault amongst the team’s best as she helped orchestrate a 3 goals to nil quarter for the team - the Wildcats trailing by 56 at the last change. With the sting long gone from the game, the Ottawa/Montreal team delivered the knock-out blow kicking four goals to nil. Aimee Legault would finish with a game-high 6 goals and the Angel-Swans cruised to a mammoth 84 point victory. Angel-Swans 13.13 (91) to Wildcats 1.1 (7).

Angel Kelsey Martin impressed on debut up forward, her first goal in Aussie Rules a glimpse at what is sure to be an extremely promising footy career to come. But it was left to up-and-coming star Tara Cools-Lartigue to provide the play of the day. Playing across halfback Tara tapped an incoming ball away from the hands of the Wildcat attacker; this was quickly followed by one of her now famous bone-crunching bumps which sent her opponent skittling to the ground like a defeated bowling pin. Tara (from this point on to be known affectionately as Tara the ‘Tank’) proceeded to scoop the ball up and fire off a kick toward the forward line. In the blink of an eye, just as the Wildcat defender attempts to mark the ball, Tara appears out of nowhere, shoulders the hapless Hamilton player out of the way, gathers the ball she had only kicked moments before and spears a pass forward hitting the full-forward target dead-on. The mark is converted in to a goal and the legend of Tara the “Tank” is etched into Montreal Angel footy folklore.

The game also showcased the Angel-Swans Aimee Legault and Emma Dickinson who have formed one of the most potent attacking duos in the league. The pair finished with 10 goals for the match and now both currently head the league goal kicking table with 9 goals apiece.