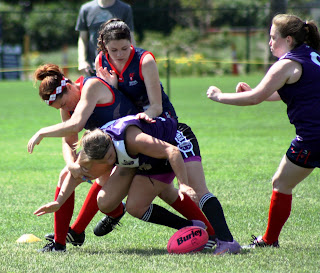 The growth of women’s footy on the east coast continued its steady rise as the Montréal Angels travelled south across the border to contest the inaugural Boston Lady Demons Tournament in Cambridge, Massachusetts. Mirroring the format from the AFL Québec Preseason tournament the Angels, Demons and Magpies would all get the chance to play each other once with the tournament champion determined by the final round-robin standings.

Needing to call on some imports to fill out their squad the Angels made a disastrous start to the match as Boston took complete control from the first bounce. The centre combination of Eileen Hansen and Emily Riehl led a Boston surge as they dominated the opening five minutes of the match, the ball never leaving the Lady Demon’s attacking zone. Tara Cools-Lartigue did well to try hold the fort down back, her job made all the more difficult matched up against star forward Lydia Holt.

Boston's Emily Riehl opened the scoring with a long range goal that bounced and skidded through the big sticks, Boston having the first three forward entries. The Angels had been lucky to escape the first moments with only a 6 point deficit, Margo Legault playing out of her skin to keep the Angels in touch. Boston continued to work that ball forward and before long had registered two more goals, one thanks to a solid mark to the always dangerous Lydia Holt. At the halftime siren the Angels were in deep trouble trailing by 18 points, 0.3 (3) to Boston’s 3.3 (21).

The Angels moved rookie Kelsey Martin from defence to attack for the second half hoping to stretch the Boston defenders and create an avenue to goal. As play got underway it was Riehl again driving the Demons from the middle and Margo Legault once again countering for the Angels. After a scrappy first few minutes the in which the Lady Demons had managed to squeeze through a behind, the Angels began to look far more dangerous in attack, Lindsay Belzie scooping up a loose ball and sidestepping her opponent before kicking the Angels first major, a feat that took the squad 19 minutes to achieve. Margo Legault’s impressive afternoon continued when she drilled home the Angels second shortly after, the margin back to just 8 points.

Boston responded with some forward pressure of their own, the Angels standing firm on the very last line of defence refusing to concede a score. The next Angel forward thrust found its way to star forward Lindsay Belzie, her gather and evasion of two Lady Demons finished with a glorious snap on goal that drew the purple haze to within just 2 points. The momentum was now all with the Angels as they pushed forward looking to snatch back the lead. A narrow miss drew the Angels to within a single point and with just two minutes remaining Aimee Legault marked at half back before playing on and sending a long bomb forward. The ball evaded all players and slipped through for another behind, scores all locked up at 23. With the ball spending most of the time deep in the Angels forward line the play was tight and tough. Just as the clock slipped under one minute left to play Aimee Legault wrestled free of her defender and snapped a goal giving the Angels an unlikely 6 point lead with just 55 seconds to play. Down but not out, Riehl won the next centre clearance and sent the ball long to the foot of the Lady Demons goal. The Angel defence rushed a behind, and the long kick out ended with the siren so
unding and an incredible 5 point Montréal victory. Angels 4.5 (29) defeated Boston 3.6 (24).

Any thoughts of savouring the remarkable come from behind victory were quickly shelved as the Angels lined up for game two against the New York Lady Magpies with a simple equation in mind, win and claim outright tournament honours. Montréal started off as they finished game one, Lindsay Belzie looking unstoppable up front kicking the games first goal. But the Lady Magpies fought back strongly taking the fight right up to the Angels. Tara Cools-Lartigue was once again a brick wall across half back letting nothing pass. Swirly winds and two rock solid defences made scoring almost impossible, the quarter drawing to a close with just a solitary goal to the Angels registered. Angels 1.0 (6) to New York 0.0 (0).

A ruck tap, rolling ball and lightning pickup by Aimee Legault were all that were needed for the first goal of the second half as Aimee Legault slammed home the Angels second major of the match in just seven seconds of play. Montréal began to dominate the match as the ball lived in the Angels forward half. New York’s defence were doing well to withstand the onslaught and only allowed five behinds amongst the constant bombardment. With just a few minutes remaining and the Angels safely ahead by 17 points the floodgates opened, Aimee Legault kicked her second goal of the match followed shortly after by another Angel goal to rookie sensation Kelsey Martin who soccered the ball along the ground to register her first for the afternoon. The siren signalled the end to the Angels clean sweep and tournament victory, taking home a hard fought 29 point win over the Lady Magpies. Angels 4.5 (29) to New York 0.0 (0).


The days final game between Boston and New York had been turned into a dead rubber but still held plenty of importance as both teams looked to avoid ending the tournament without a win. Boston held off a determined Lady Magpie outfit to lead by 5 at the main change and go on to win by three goals, Boston 3.2 (20) to New York 0.2 (2). The Angel accolades would continue post-match as Margo Legault was herself plaudits as the days best rookie.