The Montreal Angels kicked off the 2010 ECAFL season with an impressive victory in the Kirkland Soccer Experts Cup over the Toronto Central Blues.

Wearing 'retro' style Jerseys for the tournament the Angels welcomed 7 new players into the team: Martine J, Alex H, Ash G, Vero, Jessie, 'Roasty' and Evelyn. The format had the two teams squaring off in two matches, the winner decided by the team with the highest aggregate score. Any doubts about team chemistry were quickly put to bed as Montreal bolted out of the gate and slotted through the first major of the game thanks to some clever footwork by Elaine Gilmore. The Angels continued to win the ball from the centre Lindsay Belzie once again asserting herself as an enforcer as she combined with Margo and Aimee to dominate the stoppages around the field and win first use of the ball. Rookie Martine put through her first goal of the day and the Angels had skipped away to a handy 14 point lead at half-time, 2.3 (15) to the Blues 0.1 (1).

The Blues pushed hard in the second half to work their way back into the match but the Angels backline of Alex H, Mimi and Ash G were on fire repelling all efforts by the Blues to score. Mimi and Ash put vice like pressure on the Blues forwards with some intense tackilng efforts while Alex rebounded the ball and the Angels were beginning to break the game wide open. Two quick goals from Dani Anderson up forward sealed game 1 despite the last five shots on goal from the Angels going wide. Final score Angels 4.9 (33) defeated Blues 0.2 (2)

With the Angels sitting in the box seat for the cup the Angels coach pressed his team to not be compacent and put the result beyond doubt. They did just that piling on three goals and what was essentially a combined lead from game 1 of 53 points. The Blues would eventually work the ball forward and score their first goal for the day just before half time but the damage had already been done. The Angels leading 3.2 (20) to 1.0 (6). 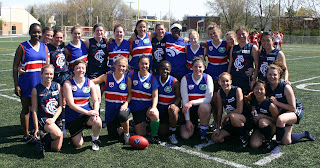 The Angels newest recruits were given bigger roles in the second half and all responded impressively. Jessie spent some time in the ruck and showed some terrific glimpses of defensive and offensive prowess. Roasty was also racking up possesions across the midfield and linking up well while Evelyn and Vero were both getting valuable touches up forward. The Blues would put through another major but it was matched by tournament MVP Aimee Legault as the Angels took game 2 and the cup final score 4.4 (28) to the Blues 2.0 (12). With such fantastic performances by many of the Angels players and a number of stand-out individual perfomances from the 'Bluettes' awarding the MVP and Coach's award for an outstanding perfomance was always going to be a tough task for the judges. The MVP was awarded to Aimee Legault narrowly beating out some of her teammates while the Coach's Award was presented to #11 Lindsay from the Blues who put in a stellar individual effort.